In honor of Independence Day weekend, we thought we’d dedicate this blog post to our founding father, George Washington and his famous wooden teeth.

In elementary school when asked about our first president, you probably thought of two things. Cherry Tree’s and Wooden teeth.

But is it true?

The answer is YES, well more or less.

George Washington suffered from poor dental health at a pretty early age. He experienced tooth decay, toothaches, and tooth loss. This is probably the result of a lot of things including diseases common for that time, genetics, and a poorly balanced diet. By the time Washington was inaugurated president in 1789, only one real tooth remained in his mouth. He was fashioned multiple dentures throughout his life, all of which not only made talking and chewing difficult, but they were also very uncomfortable, causing pain and even facial disfigurement

Here’s where we get to the “more or less”; technically, none of George Washington’s false teeth were ever made of wood. The only surviving denture of Mr. Washington is preserved at Mount Vernon and is made of animal and human teeth, lead, and ivory. 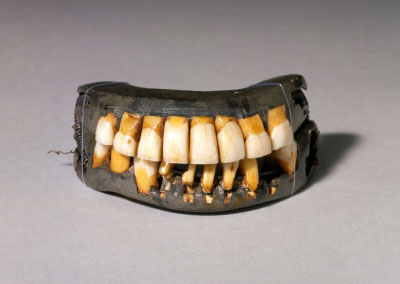 Thank goodness dentistry has come such a long way since the 1700’s.

You can follow us today!
Get updates on classes & schedules

Copyright All Rights Reserved © 2016 | Powered by Peak Enrollment
Contact Us

We are excited to help you take the next steps toward your dental career. Contact us and we'll get back to you asap!